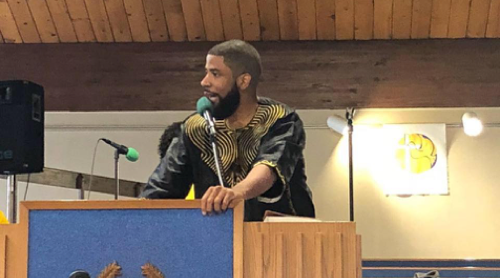 Rev. Nelson Jerome Pierce, Jr. is the senior pastor of Beloved Community Church, and is the Organizing Manager at Democracy for America where he works to advance political leaders who will bring about a more just and equitable world.  Rev. Pierce is a graduate of Eden Theological Seminary where he earned his Masters of Divinity.

Rev. Pierce was born in Detroit, Michigan, the son of the late Revs. Nelson and Dorothy Pierce. Raised in Cincinnati, Ohio, he was called by God and licensed to preach by Southern Baptist Church at the tender age of 13.  Rev. Pierce received a Bachelor of Arts degree in English Literature from Washington University in St. Louis.

While in St. Louis Rev. Pierce was ordained to the gospel ministry at the Washington Tabernacle Missionary Baptist Church under the pastorate of the Rev. Dr. Jesse T. Williams Jr.  During his 14 years in St. Louis Rev. Pierce also served as the minister of Special Projects for Central Baptist Church and the pastor of Unity Fellowship Church in Alton IL.

Rev. Pierce has worked to strengthen the justice ministries of churches all around the country. As the lead trainer for the Black Church Institute, Rev. Pierce led workshops and national conventions to equip pastors and churches with the tools they need to address, in a holistic way, the issues of sex and sexuality. While in Ohio, Rev. Pierce has organized clergy from around the state to fight attacks on voting rights and on workers rights, and fought to keep Ohioans safe from Stand Your Ground legislation and police brutality. In the late Summer and Fall of 2014, Rev. Pierce played a critical role in organizing clergy and young people in the aftermath of the killing of Michael Brown in Ferguson, MO for which he is recognized in a video tribute in the Smithsonian National Museum of African American History & Culture in Washington DC. In the fall 2018, Rev. Pierce led an effort to organize the voting power of the Black Church, an effort that engaged over 50 churches and over 3,000 people.

In Exodus 4, Moses and Aaron let the people know that that God has heard the people’s cries about the oppression they are facing, and that God has called Moses and Aaron to do something about it. The Bible said when the people heard that God was concerned about them, and knew about their oppression, the people worshipped. Rev. Pierce believes that social justice work is an essential  part of our evangelism. Once people believe that God cares about what they are going, and is working for their liberation, people will find their way to worship.